How Much Does a Solar System Increase the Value of a Home?

Many solar companies cite an article from 1998 when they tell you how much solar will increase the value of your home. The reference is The Appraisal Journal: http://www.icfi.com/Markets/Community_Development/doc_files/apj1098.pdf

You may wonder why companies cite this 11 year old article rather than something more current. The basic answer is that solar companies like the result that the author of the article derived. (They won't point out that the article was actually about energy-efficient homes, not homes with solar systems.) Solar companies will typically say "The value of your home goes up by $20 for every $1 of annual energy production by your solar system." Many solar companies use this formula to tell potential buyers that the solar system will increase their home's value by far more than the system's price.

This defies all logic. Let's illustrate this with an example.

Suppose there are two identical homes on a street in Anytown, USA. Each has a fair market value of $500,000. One homeowner purchases a solar system for $18,000. He is told by the solar company that the system will reduce the home's annual energy bill by $1,800. So far, so good. But then the solar company says, citing the Appraisal Journal article, that the solar system will increase the value of the home by $36,000 (i.e., 20 x $1,800). The other homeowner does not buy a solar PV system.

Let's further suppose that the day after the solar system is turned on, both homeowners put their houses on the market. The non-solar homeowner prices his at $500,000 and the solar homeowner lists hers for $536,000. Dozens of buyers come and look at each home. Some want to live in a solar home and some don't. If those who want to live in a solar home (or their real estate agents) perform any amount of due dilligence, they will quickly learn that they can buy the non-solar home for $500,000 and spend $18,000 to add solar to it. Therefore, it would be foolish for them to pay an $18,000 premium for the solar home because this far exceeds the cost of adding solar to the non-solar home.

Furthermore, it is generally expected that brand new solar systems will cost less with each passing year. If that is the case, then the value of an installed (used) solar system will decline each year simply because the cost of an equivalent new system will be less each year. In addition, solar systems have a finite useful life in the range of 20-40 years. Let's say that 30 years is the appropriate useful life. If we want to know what a used solar system will be worth in 5 years, we have to estimate the price of a NEW system five year from now and then reduce the value of the USED system by 5/30ths to account for the fact that the system we purchased in 2009 has used up 5/30ths of its useful life.

Under the theory espoused in The Appraisal Journal article, the difference in value between the solar home and the non-solar home will increase year after year if the price of energy rises over time. This produces the nonsensical result of predicting that the solar system has the greatest market value in its final year as a functioning piece of apparatus! That's just plain nuts!

In reality, if solar equipment prices stay constant or decline in the future, the market value of a solar system is highest on the day it is installed and will decline gradually until it reaches zero when the equipment reaches the end of its useful life. This is exactly the kind of reduction in value over time that we would expect from any long-lived asset whose value is based on its practical utility rather than fashion or trendiness, such as an automobile.

Beware of any solar company that tells you that a solar system will increase the value of your home by more than the system's initial net cost. They either have not thought very deeply about the subject or they are trying to manipulate you. Why would you want to spend your hard-earned dollars with a company for which either of those statements is true?

If you'd like a copy of a spreadsheet that supports the arguments in this posting, send me a note at bkarney [at] comcast [dot] net.
Posted by Bruce Karney at 5:20 PM 3 comments:

Solar for All -- Including Renters

I've recently developed a proposal that I call "Solar for All." It would make it possible for condo owners and renters to own or lease solar PV just as homeowners can.

On May 8 I met with Assemblyman Paul Fong and Monica Smith from his staff last week and they both seemed quite interested.

I would greatly appreciate feedback on my proposal. The 8-page Word document describing "Solar For All" is online here.

In a nutshell, the idea is to use "virtual net metering" to allow the solar panels to be located on a solar farm rather than on the building where the energy is used. However, the solar farm is not owned by your local utility company: the panels are owned by a for-profit company and leased to the family whose bill is being offset.
Posted by Bruce Karney at 4:15 PM No comments:

This week was the 2nd anniversary of my solar system being online. Though I've rinsed off my panels every 6-8 weeks, I noticed that production was dropping. In Year 1 the system generated 3029 kWh and in Year 2 only 2796. That's a 7.7% difference.

On Thursday I cleaned my panels using dishwashing liquid in warm water. I used a 12' pole and window washing pad (sort of like a mop) so I could do this from a 5' step ladder without climbing on the roof. After washing each panel the pad was black, and the water in the bucket quickly turned black as well. Those panels were DIRTY, despite having been rinsed off more frequently than most solar vendors say you need to. (By the way, my roof is pitched at about 20 degrees, which is pretty normal for this area.) The whole job took about 30 minutes for my 12 panel system.

My SolarGuard monitoring reported an 8% increase in output on Friday. Weather was nearly identical (and perfect) on both days, so I think the entire amount of increase was due to the washing, not weather or temperature.

If I can maintain this enhanced production, it will generate about $50-70/year in extra energy.

You can buy the pole and pad at a home improvement store for about $40 and it will pay for itself in less than a year. 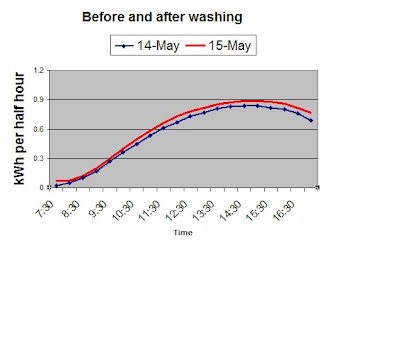