How to fund solar for churches and non-profits

[Title Slide] Good afternoon, everyone. My name is Bruce Karney and I'd like share an idea that I began working on 3 years ago at SolarCity.

At that time SolarCity was best known for its community-wide solar discount programs. As Community Program Manager, I met several individuals who were looking for an affordable way to get PV systems for their church or favorite non-profit agency.

[Slide 2 - Photographs] By the way, throughout this talk I'll use the abbreviation CNP to mean church or non-profit.

I was impressed by their passion, and worked with them to find a financial structure that would meet their needs. Some groups wanted to lend money to the CNP and be repaid by the electricity savings. Others wanted to form a partnership to own the system and to capture the tax and depreciation benefits.

But as we examined the cash flows and tax laws, we could not find a viable investment model. Just as with residential solar in the days before PPAs and leases, only the wealthy or truly environmentally committed CNPs ended up installing solar, and they did not benefit from any tax incentives.

[Slide 3 – Current Situation] The core issue, of course, is that Federal solar incentives are tax incentives, so CNPs pay at least 30% more for solar than for-profit businesses do.

The large-scale investors that fund residential and commercial PPAs have avoided the CNP segment due to low profitability and perceived risk. There is a lot of overhead involved in each and every PPA. Most CNPs need systems that are too small for commercial PPAs to pencil out. The financial stability of CNPs is another barrier. CNPs don't have credit scores. Despite the fact that many have long histories of financial stability, disinterested third party financiers do not find their risk profiles appealing.

That being said, there are a huge number of churches and non-profits. With one simple change to federal tax law, I think it is possible to get 10% of them to go solar in the next 4 years.

[Slide 4 – Proposed Change in Tax Law] Since 1986, US law has only allowed losses from passive investments, such as real estate partnerships, to offset passive income. Passive losses cannot be used to offset active income, such as wages. Before 1986, passive losses could offset an unlimited amount of active income, but this was deemed to be an abusive tax sheltering strategy. Interestingly, and as a partial precedent for my proposal, a $25,000/year exception was carved out for low and middle-income taxpayers with passive losses.

I propose adding another limited exception for passive losses of up to $50,000 per year for solar systems owned individually or through a partnership. This exemption would only apply if the system is installed at a church or non-profit and placed in service between 2013 and 2016. Active participation in the management of the system would not be required for the investors to qualify for this exception. As tax changes go, this is truly a modest proposal. It is limited in amount, duration, and scope. It is not targeted at any special group of Americans. It is an opportunity available to any American taxpayer.

To unleash the expected tsunami of solar deployment, it would also be necessary to have standard legal documents for partnerships and PPAs, and simple software tools for partnership administration. These could easily be open-sourced and made available at very low cost.

[Slide 5 – Expected Results] I predict that this simple change could lead to the installation of 100,000 small solar systems in the next 4 years, averaging 20 kilowatts, but totaling 2 gigawatts.

While some people will invest six-figure amounts, the vast majority of investments will be just a few thousand dollars. Someone who invests four thousand dollars for 5% ownership of a 20 kilowatt system would get a $1200 tax credit and the modest amounts shown on the slide as passive depreciation losses in the first three years.

One very important attribute of the kind of investors who would support solar for their CNP is that their required hurdle rate is exceedingly low. Potential CNP investors have always told me that they just want to break even or earn a very small return. Instead of looking for 10% after-tax returns like Wall Street investors, they would be happy with 2%.

[Slide 6 – Conclusion] In closing, let me focus on political viability. This idea has bipartisan appeal. It will create tens of thousands of jobs, yet all of the funding is from voluntary investments of private capital.

Republicans will like that it will help American solar installers, which are usually small local businesses.

Democrats will like the rapid scalability, the environmental benefits, and the creation of 2 million new solar advocates.

I believe that the current Congress would approve this tax law change.

Please join me in urging it to do so.

Excess solar generation worth only 4 cents/kwh?

After nearly 2 years of regulatory studies and hearings the Public Utility Commission ruled yesterday that solar system owners who produce more kWh than they consume will be paid about 4 cents/kWh for their "excess generation." Full details are in this article by SFGate writer David Baker.

This is a very disappointing result.
Posted by Bruce Karney at 9:13 AM 1 comment:

Here's an image that depresses me. (Source: http://nsidc.org/arcticseaicenews/ ) 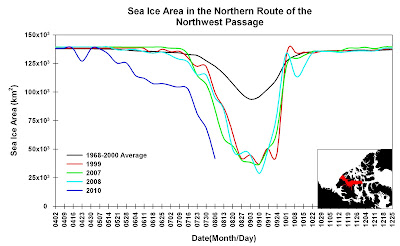 As the Arctic warms, less ice remains throughout the summer. This year, it appears that the Northwest Passage may be completely ice free by mid-September. The fewer months of ice cover, the more solar energy the Arctic Ocean will absorb and the more likely it is that subsequent summers will be even more ice-free. This is just one of the positive (amplifying) feedback loops that makes climate change a serious threat to ecosystems in many parts of the world.

Posted by Bruce Karney at 6:38 PM No comments:

PG&E filed a document with the CPUC today that suggests it feels 8 cents/kWh is a fair price for "overproduction" by solar system owners. The final determination of the price utilities will pay will be made by the CPUC within the next 2-3 months.

Overproduction occurs when, over the course of a year, the solar system produces more kilowatt hours (kWh) than the home uses. This is not the same as simply driving the electricity bill below zero. For example, we are on a Time of Use rate plan and our bill is zero even though our PV system only produces about 70% as many kWh as we use. We produce a lot of high-value "on peak" kWh and use a lot of low-value "off-peak" kWh.

Up until now, PV system owners have received no compensation for overproduction. The energy, and its value, have been donated to the utility. (This is true in all utilities in CA that I am aware of, not just PG&E territory.)

The bill that caused this policy change is AB 920 "The California Solar Surplus Act" from the 2009 Legislative session. Thanks to Jared Huffman for introducing AB 920!
Posted by Bruce Karney at 8:10 PM No comments:

Solar is HOT in California

The residential and commercial solar markets are smoking hot in California this Spring. As you may know, State incentives decline whenever sales of solar PV systems reach certain trigger points. There are separate incentive programs for residential and non-residential systems purchased in each of the state's 3 investor-owned utility territories: PG&E, SDG&E and SCE.

Between March 26 and April 26 all six of these programs reached the end of an incentive step and lowered their rebates. This was caused by a huge surge of demand, most of which occurred the six weeks after Valentine's Day. The solar market usually pauses to catch its breath after rebate drops, but it also traditionally has its strongest selling season from June to August. I predict that the strength we've seen recently will continue and that at least 4 of the 6 programs will record another rebate drop by the end of 2010.

You can keep track of California rebate levels and reservation levels here: http://www.csi-trigger.com/
Posted by Bruce Karney at 8:00 PM No comments:

In March, 2010, PG&E filed its General Rate Case with the California Public Utility Commission (CPUC). In it, it asked for significant reductions in its top residential rates on June 1. PG&E requested permission to merge Tiers 3, 4 and 5 into a single tier and charge $.298/kWh. The graph shows 4 years of history, including the proposed reduction (which the CPUC has not yet ruled on. 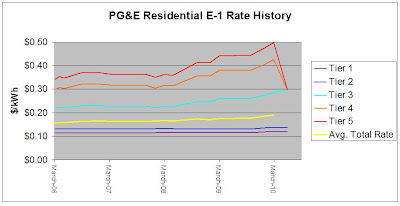 There are many ways to look at this proposal, and I take a relatively optimistic view of the effect it would have on the solar industry if it were adopted. It's certainly true that the proposed rates would take a lot of financial pressure off homeowners with very large electric bills. The amount they could save by adding a PV system would fall dramatically. But, in my experience, it's not actually people with a $800/month electric bill who are driving the residential solar market. It's people with bills in the $200-$350 range, and the proposed rates would create a lot more ratepayers like this.

If you look back at 2001 when the 5 tier scheme was first adopted, the ratio between the highest priced kWh and the lowest was 3:1. Today it is 4.5:1. Under PG&E's proposal it would go 2.6:1. This is still a steeply tiered rate structure. I can't easily imagine people wasting electricity because it costs only $.30/kWh instead of $.50.

My top reason for feeling OK about the proposal is that the proposed rates are very similar to what is charged by San Diego Gas and Electric, and that part of the state has adopted solar at an even faster rate than PG&E customers over the last year.

The CPUC will probably rule on PG&E's request in very late May. When they do, I'll update this posting.
Posted by Bruce Karney at 7:38 PM 1 comment:

"Solar for All" is no more

In April 2009 I contacted my local Assemblyman, Paul Fong, and asked him to make it possible for renters, condo owners, and others to lease solar panels located on solar farms and offset all or part of their electric usage via remote net metering. Essentially, this would give every residential electric customer in the state the same access to leased solar that homeowners have enjoyed for the last 2 years.

In February, 2010 Mr. Fong introduced my bill (AB 1947). I had high hopes for the bill, but it was completely gutted and amended to serve an entirely different purpose. It is now a bill that will benefit only a few rate payers in the Sacramento Municipal Utility District area.

Thanks to everyone who supported Solar for All in its original form. It may be possible to reintroduce it in 2011 with a better outcome.